Does Having a Character in an Explainer Video Help Connect With The Audience?

No matter if you are old or young, man or woman, you have always done a double take at every new Movie trailer with any of the stars or even the other one’s going all packy on the screen. The packs can range from 4-8 and sometimes more, but due to anatomic restrictions, never an odd number.

I’d like to call this as the human connection more than anything. A physical embodiment of a character becomes important in trying to get a point across. A certain physical appearance helps us to identify with the character. It gives a back story and reliability towards the character and what he has to say.

In a similar manner when you are making a video to explain certain things to your customers, it becomes important for the viewer to associate with your concept and that can be effortlessly achieved by having a character do all your explanations. The viewer can then associate with what the character has to say about your product or service. There is a sense of relatable narration going on here.

Furthermore, having a character in an explainer video can create a foundation for expansion of your video into sequels for explaining newer products and services as and when you might launch them in the future. This expandability can be narrowed down as one of the single most important reason why personal video blogs are successful.
With the magic of animation, the character 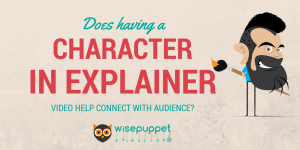 does not necessarily need to be a human with six pack abs or unrealistic degrees of curvature. It can range from a robot to animals to inanimate objects like furniture or even stationary. Depending on who your target audience is, you can create new characters that can help grab the attention of your viewers.

Think about it, why does Microsoft Office help have a dog, a cat or even a paper clip as an animated character instead of just having a simple input output dialog box? It is a simple matter of character association.

As an even better example, take the animated TV series, The Simpsons. Why has this series managed to get so much popularity across the world and keep running for 26 seasons from the year 1989? Because everyone in the audience has a character in the series that they can easily associate with. From lazy cop to naughty brat to an immigrant cliché.

Consider having a character in your next marketing video and it is bound to become a shortcut to connecting with your audience.