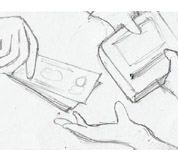 How we see the Story and Storyboard

Any video which looks to drill right into the midst of the audience’s attention span, has a lot to ponder upon and decide. The content of the video stands high on one side, while its aesthetics and visual appeal fill the other. So, what are these integral parts of a simple, short and effective video? The baseline script, and the dynamic storyboard?

A script is that part of the video which gives it content. What happens in each moment of the video, what all are put out there, what exactly is the essence of the idea the script encompasses all this. A video without a good script is what would be termed as without substance. It will simply proceed like a mash up of colors and pictures, moving and otherwise, without making sense, from one moment to another. Your audience will watch your video as you intend them to, but they won’t be getting the point you are putting across, simply because there isn’t any.

In another point of view, your video might have the best content it can get. It might have the best points and the most powerful verses in it to influence each and every person watching it. The destination might be precise and accurate, but the path to it, might be way too rugged. Putting the video across effectively, forms the foundation of how much your message will get ingrained in the audience’s minds. This is where the storyboard comes into play. The storyboard defines all the hows How does the video proceed, how does the transitions shape up, how is the point being conveyed etc. Without a storyboard, the video will look more like a black and white rainbow with content in it, but not interesting at all.

A script and a storyboard, when blended together properly, makes your video informative and appealing. The mix is important, but the proportion of the mix is usually according to the occasion.